I didn't have many carded original trilogy figures, but enough to say I had a collection. 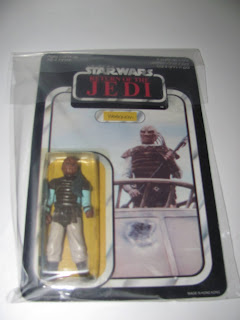 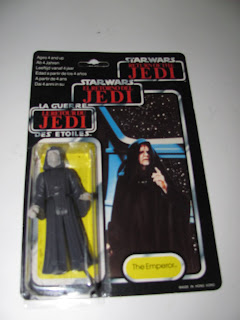 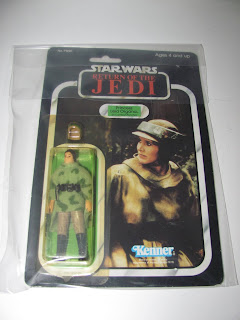 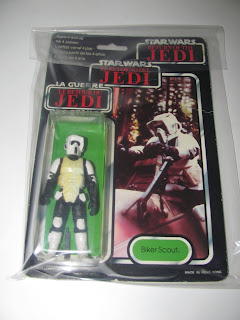 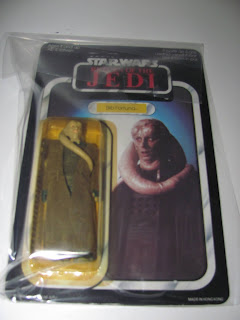 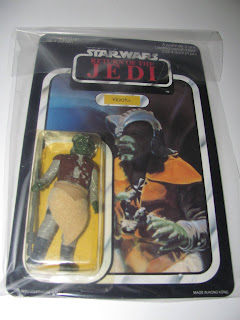 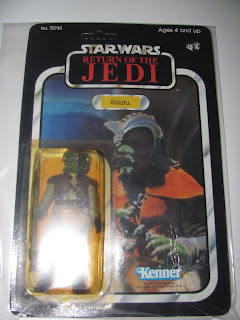 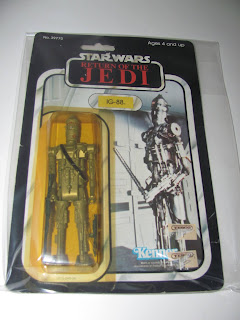 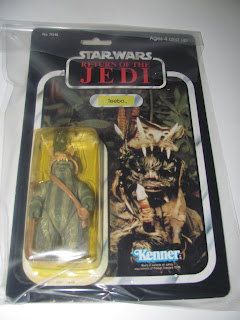 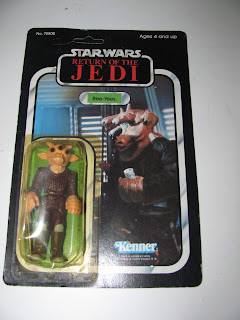 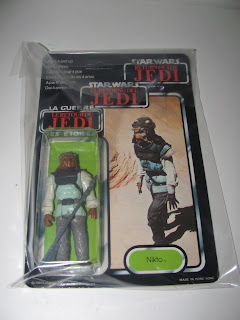 Yes, I could've put Klaatu and Nikto closer together, but without Barada the film reference doesn't make any sense (if you don't know, search for or watch The Day The Earth Stood Still)
I also have a couple of carded figures from the Droids and Ewoks cartoon spinoffs.

I still get the occasional piece of Star Wars memorabilia as gifts, mainly from my wife and kids. Being quite keen on Disney too, the cross-over of the two crops up from time to time.

For example, here's a couple of vinylmation dolls from Episode 7, The Force Awakens. 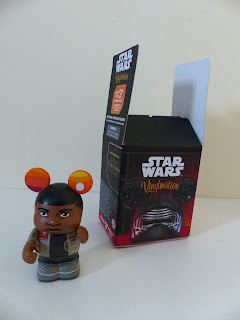 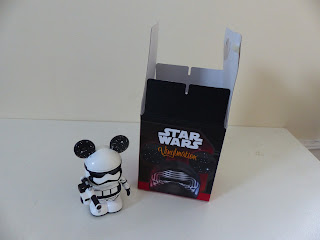 Even before Disney bought Lucasfilm and started diluting the franchise, they were merchandising stuff via their theme parks. Remember the Star Tours ride vehicle? Well, here's the mug for the same ride, which I picked up in the 1990s. 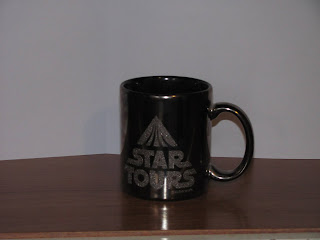 And there were action figures too. For example, Stich as Emperor Palpatine and Minnie Mouse and Princess Leia Organa. I bought these to keep nice, though I did give one of my kids his own Minnie Star Wars dolls. I think Minnie as Leis got buried in the back garden when he was playing one day, and Minnie as Queen Amidala is somehwere in his old toy cupboard. 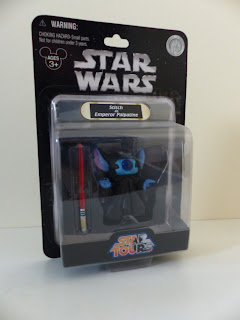 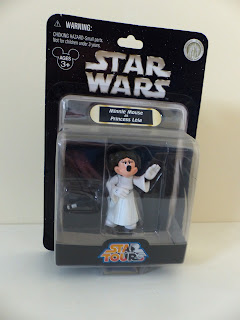 Another nice Disney piece I have is a pciture of Mickey and Minnie as Luke and Leia on Speeder Bikes. If I get around to it I'll add a photo of this.

As this post was written in the holiday season (nope, I'm not mentioning the Star Wars Holiday Special...ooops), here's a few Christmas ideas.

Email ThisBlogThis!Share to TwitterShare to FacebookShare to Pinterest
Labels: disney

Whilst flicking through an old scrap book I found these bad boys that I had stuck in the book.

So, what do we have here?  Well, as you can see, there's an X-Wing under attack from a Tie-Fighter on the wrapper of this chocolate iced lolly! Can't wait to unwrap and see what is inside! 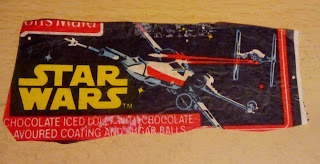 Next! We'll I've got C-3PO and Lando Calrissian stickers, and in between them is the sticky "surround" from See-Threepio's sticker. Heck knows why I kept that, but I did use it to partially attach the stickers and the wrapper to the scrapbook. so it came in handy. 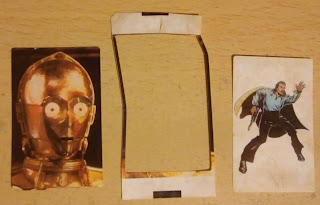 Finally, I've also got the C3-PO wrapper too.  It's a bit hard to read what it says below so here's the words for you. "See-Threepio is a tall robot with a gleaming metallic surface. His human-like appearance is often matched by his human-like behaviour." 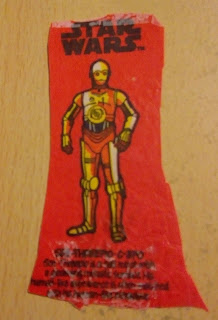 I've always preferred vintage Star Wars stuff to collect. I guess it's because Episodes 4,5,6 were such a feature of my childhood, and, let's face it, the films were the best too.

However, a fair portion of my collection is from the prequels, and these particular carded figures appealed to my vintage side. I found them on Ebay not long after The Phantom Menace's toy line had hit the shelves. I think it's fair to say the Episode 1 packaging didn't match up to the original Kenner/Palitoy designs. So, it was inevitable that someone would make these.

To be honest, I can't remember what I paid for them. They are quite well made, with punch holes on (2 with and 2 without the punched holes) - not bad for what were probably early custom cards. 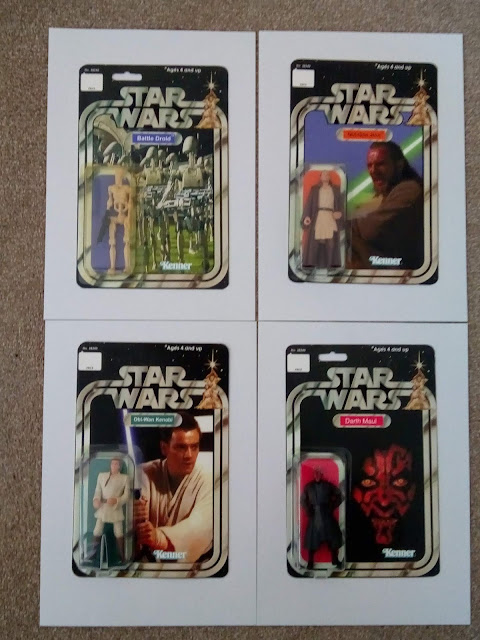 So, you can see above the figures were a Battle Droid, Qui-Gon Jinn, Obi-Wan Kenobi and Darth Maul.

There were 3 different designs on the back of the cards (2 figures had the same back-of-card design). I've also included in the picture below (sorry, blurry pic!) a Protech Star Case too as I've kept all of these figures in the protective case since I got them. 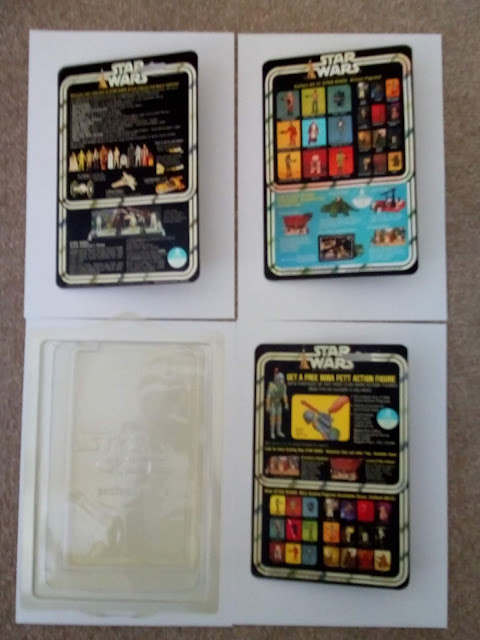 Finally, here they are in their Protech Star Cases. 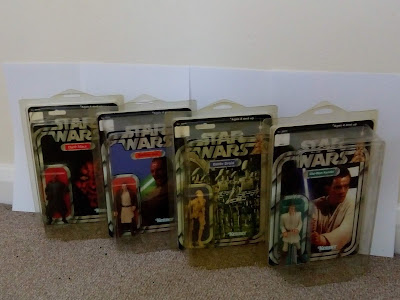 Dating back to the late 1970s, these were fab transfer sets that were great fun for kids, albeit very annoying when after rubbing neatly with pencil you found Obi-Wan "Ben" Kenobi's head hadn't transfered properly!

Of course, being a kid I didn't do them properly.  Stormtroopers has to be jumping from the Falcon, mechanics were fixing spaceships as they flew by, characters intended to be far away in the scene appeared next to close-up characters. The adult in me is somewhat aghast as my childish efforts, though I admit a degree of rebellious pride too. 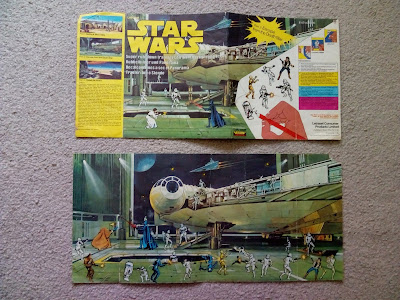 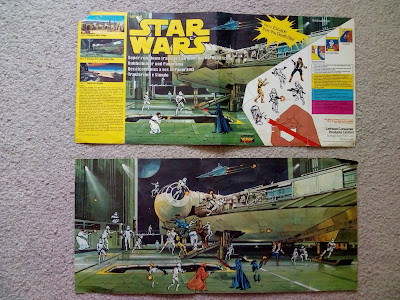 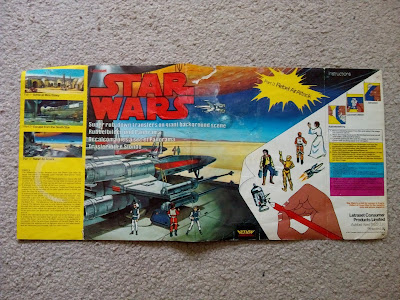 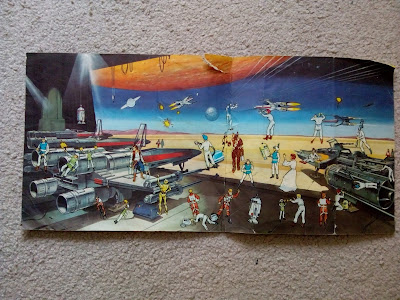 
Before we get any further I do have a Return of The Jedi sticker album somewhere in my collection, so I'll need to dig it out and add it to this post sometime.

Here's a couple of more recent sticker albums. I have a couple of unused The Episode 1 Phantom Menace sticker books. The Clone Wars is complete. 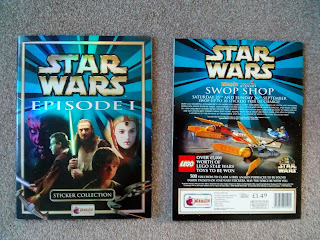 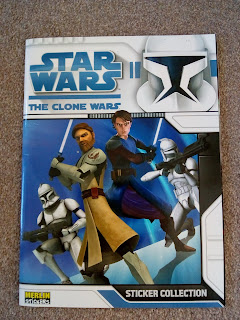 Email ThisBlogThis!Share to TwitterShare to FacebookShare to Pinterest
Labels: Return of the Jedi, Stickers, The Clone Wars, The Phantom Menace

If you think you've seen it before, well you may have. This cap made an appearance on this blogs' first post back in 2012, but I decided it needed its own post. Afterall, I think it is quite a rare artefact. In Star Wars terms you may call it vintage. 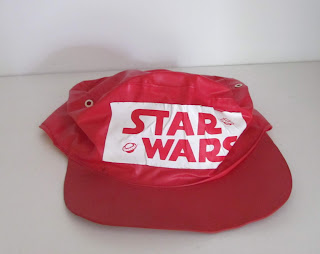 If you google for Star Wars red cap or red hat amongst a bunch of irrelevant stuff you will find this picture from this blog. After a bit of searching I still haven't found anyone else with one. Okay, my brother might still have his, but I've not seen anyone on the internet with one.


So, a little about the hat. I think I got it around the time of the original Star Wars release, way back in 1977, though it's possible it might've been the following year. I'm not sure where it was bought from either. It's most likely that it was bought "up north" as we lived in Middlesbrough at the time, all relatives were in Hull and any vacations were taken up north too (including places like The Lake District, Blackpool, Bridlington, Scarborough, Filey Brigg and Redcar.)

I'm pretty sure it wasn't authentic Lucasfilm merchandise - Would George approve of the little flying saucers?!😄

It might've fitted me 40 years ago, but now it's just another Star Wars collectable sitting in a box. I did ask my kids to model it for me but they refused!

I have more Star Wars caps so I will post them on here soon in a separate post. I think this cap deserves a blog post all to itself.

Email ThisBlogThis!Share to TwitterShare to FacebookShare to Pinterest
Older Posts Home
Subscribe to: Posts (Atom)
Blog of my Star Wars collection - from figures to books, videos and more. IN THE BEGINNING...